If one of the most difficult tasks given to a director is that of producing an opera by Bellini, the brilliant Speranza Scappucci did so with flying colours. The music she created under her magic rod was sheer emotion and precision from beginning to end. She has been the much appraised Music Director of the ORW-L since 2017-2018.

In her wake, Vincent Boussard, the French stage director proposed a strange view of Oliver Cromwell’s  XVIIth century. Throughout his utterly dark and ominous staging, he also wanted the performance to sound like an actual Requiem for Bellini set at the time of the composer’s death. At least it was his intention to dig into a vivid 1830 funereal rite, dedicated to highlighting Bellini’s unfortunate shortened lifespan. Therefore, he makes the show start with Bellini’s burial. Aged 34. 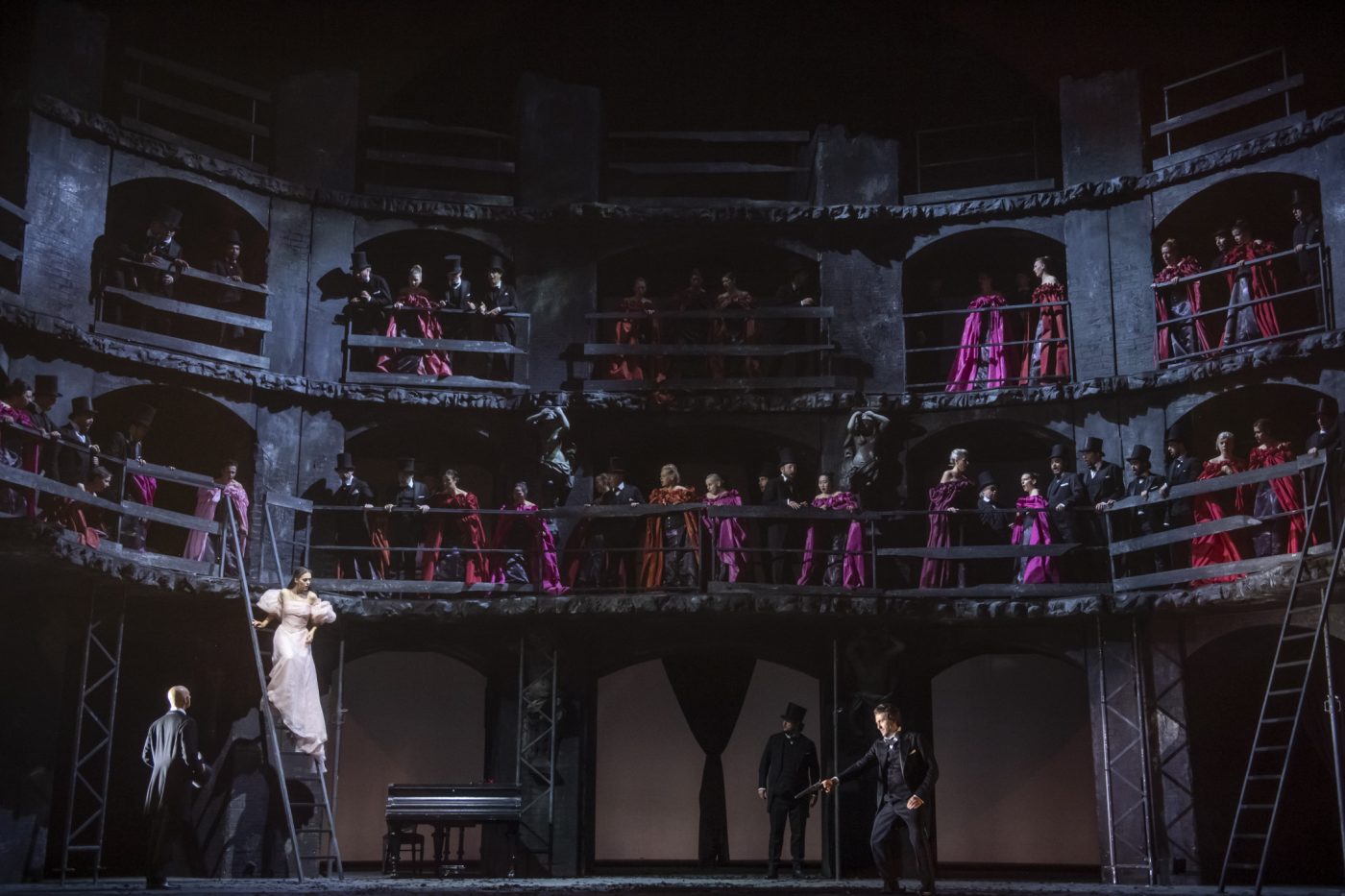 The burial hole is then replaced by a concert piano, beached in a central position, under a series of arched triple storeys designed by Johannes Leiaker. The wedding of Elvira, daughter of Lord Walton (Alexei Gorbatchev), the Puritan leader is about to take place. Unless Elvira refuses. She is in love with Arturo, a young royalist. The other camp. However, Sir Giorgio (Luca Dall’Amico) tells her how he managed to convince her father to change the wedding plans. Riccardo seems to accept his fate and shares his plight with his friend, Bruno (Zeno Popescu).

In the beginning, the sleeping Elvira lingers in her white robes on top of the lid of the instrument. Or is she the embodiment of the last rose thrown at Bellini’s funeral? Does the suddenly lifted lid of the instrument symbolise the soul of the composer mirroring his last heroin? Would the black instrument even stand for the composer’s coffin dug up from Père Lachaise? Or is it the cradle of Elvira’s growing madness? And a mirror image of the destructions caused by civil wars?

It is also a secret passage for the captive Queen Enricetta. She is the widow of beheaded King Charles I and needs to escape from prison. She asks Arturo, Elvira’s lover to disregard his wedding ceremony and help her instead. He will faithfully do his duty. The black instrument is also the tomb to all Elvira’s love dreams. Feeling betrayed by her lover, Elvira falls into madness. How will she survive to overcome her ordeal?

The inner beauty of Music and its strange power

Anyhow it seems that music wins it all, with its inner beauty and power. There are incredible vocal acrobatics matching the flows of emotion and the 50 shades of Elvira’s madness. But above all, – words cannot do this – the composer’s Music has turned into a  tool to describe insanity, this, half a century before medical scientists started to describe it for real. Charcot, the founder of modern neurology, was indeed the first pioneer to tackle hysteria, hypnosis, and related ailments. At some point, the stage even alludes to the Anatomy Lesson by Rembrandt. Ominous lightings by Joachim Klein.

Digging further, it even seemed the whole action was being seen under or through a huge looking glass as if to examine tissue sections under the microscope. However, quite superfluously, the stage director added a silent black woman figure (Sofia Pintzou) roaming the scene, sometimes cruel, sometimes using her charms. She represented anything from jealousy, revenge or death.

No need, the point was made: Music had it all. Music is insuperable. This is how Vincenzo Bellini, identified with the role of Arturo, artfully remains alive through his music. With this frame of mind, patriotism, duty or even Love are fiddles.

Material for a keen musical editor

Spectacular performance at any rate, as it is a world première showing a full execution of Bellini’s music, without the slightest cut in the original score, recovering its prime lustre.

All recorded in streaming on Saturday, June 22nd. For sure, the material is ready for any keen music editor who would wish to work on it. Mr. Stefano Mazzonis Di Pralafera, the General and artistic director of l’Opera Royal de Wallonie-Liège insists: It is indeed an entirely different job from producing a show.

The distribution brings together excellent soloists of exceptional level surrounded by a chorus led by Pierre Iodice, who never fails to fill the spectators’ highest expectations. The use of space is rather static all the way through but Christian Lacroix’ sumptuous costumes contribute to the pleasure of the eye, especially the pink dress of Elvira, that belts her up like the petals of a rose. 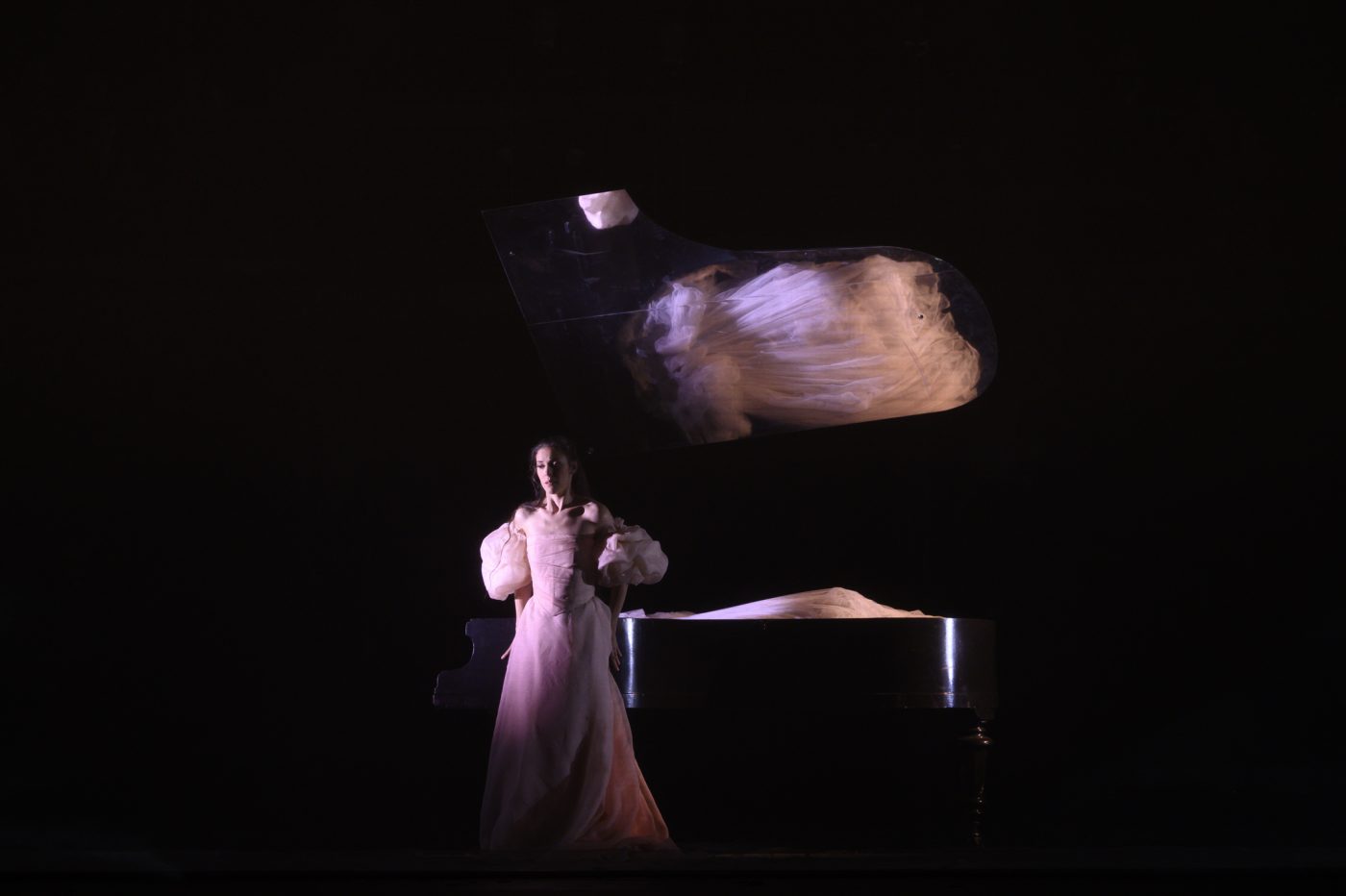 Both leading roles are overwhelming. Lawrence Brownlee (Arturo) and Zuzana Markova (Elvira) have definitely conquered the audience of Liège’s Royal Opera. The style of Lawrence Brownlee is effortless pure singing. All fluid, lively and accurate. He possesses the bold vocal power which enables him to confront all the ‘bel canto’ murderous ascents designed by Bellini in a perfectly natural way. His voice is supple, homogeneous and clear while toying with the Italian diction like a native speaker.

The dazzling Zuzana Markova has everything under control: acting singing and madness included.  The audience is mesmerised by her heavenly ascents. Pearly series of trills punctuate love and despair. Her voice comes up and down in glittering volutes of intimacy.

Mario Cassi sings Sir Riccardo Forth. He is equally moving and powerful in his role of a rejected pretender avid for revenge. Unscared in his most perilous vocalisations. Let us also underline the irreproachable musical commitment of crisp Alexise Yerna. She sings Queen Enrichetta beautifully. She is both panicked and manipulative and integrates her role ideally.

Streaming on Saturday 22nd June at 8.30 pm on www.francetvinfo.fr/culture and soon on Mezzo and Musiq3.

This site uses Akismet to reduce spam. Learn how your comment data is processed.